Gudauri is a developing ski resort, located in the Kazbegi region of Georgia, 110 km from Tbilisi and 70 km from Vladikavkaz, near the Cross Pass. It is the largest and the most modern ski resort in Georgia with well-developed infrastructure, one of the highest elevation levels and unlimited opportunities for freeriding and backcountry skiing (ski touring). The resort is situated in a settlement on the highest altitude of the Georgian Military Road (previously called "Heavenly Gorge Road"), and is one of the five highest permanently inhabited settlements in Europe — the houses at the resort are built 2000-2750 m above sea level. Gudauri resort appeals to mountain lovers from all over the world!

The resort itself is located 1960 - 2200 meters above sea level and represents three main zones of hotels and other accommodation types: Lower Gudauri — the central part of the resort, New Gudauri — a zone with apartments and apart-hotels, and Upper Gudauri, where hotels and guest houses are located.

In the central part of Gudauri, there are supermarket and sports equipment stores, a bank at the Marco Polo Hotel, ATMs and a seasonal pharmacy, a police station, an ambulance station, and a car refueling service.

The highlight of the Gudauri resort is freeriding — off-piste descent through the virgin fields. Deep snow cover, no stones on the way and no avalanche danger make Gudauri a real tourist mecca for experienced riders and freeride beginners. The resort is surrounded by a huge number of off-piste slopes for backcountry and heli-skiing.

As for the snow, the ski season in Gudauri lasts from the second half of December to mid-April, at this time skiing is comfortable on all the slopes. In snowy years it is possible to ride the third, fourth and fifth lines of cable car way in November and May.

The resort has a functioning snow making system on first line routes.

The skipass price is one of the lowest worldwide and ranges from $14 to $17 per day and about $80 for a five-day pass. A customer buying a multi-day skipass gets a standard SKI DATA system card, valid at the resorts with similar lift pass systems all over the world.

In the 2019 season was opened a cable car way linking the skiing areas of Gudauri and Kobi, which l opened a new ski area and provided a new way to reach Gudauri if the Cross Pass is closed.

Ski tracks and lifts: The lower lift station is located at an altitude of 2000 m, and the upper station is at 3276 m on Mount Sadzele.

The lift brands are Doppelmayr and Poma. The length of the tracks is more than 70 km.

The total number of tracks is 22. The lifts of the resort can simultaneously serve 11000 people. 218 hectares of ski runs are maintained by snowcats every night. 20% of the slopes are designed for professionals, 80% - for amateurs. Snow cannons are installed on the first and second runs. 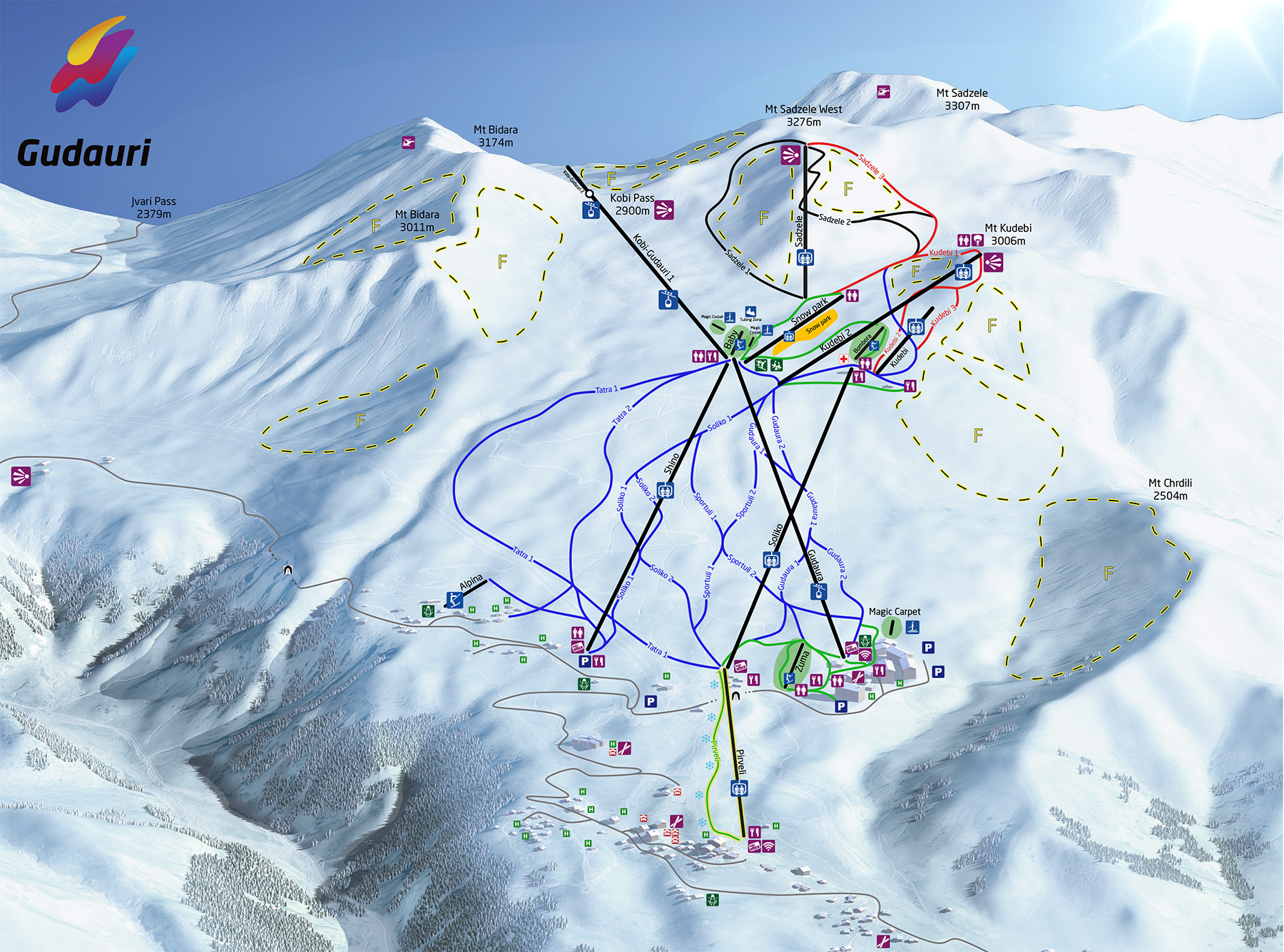 The cost of a unified ski pass valid in all ski resorts of Georgia: Gudauri, Bakuriani, Goderdzi, Svaneti

** Student ski pass will be issued only to Georgian citizens. When buying a ski pass, the student must provide an ID card or an appropriate document confirming his active students status.

Rental prices for ski equipment in Gudauri – in US dollars

Prices are given in US dollars